Simple examples and utilities for the STM32 "Blue Pill"

You can now buy "Blue Pill" development boards individually for less than $2. These devices have ARM Cortex M3 CPUs running at 72MHz, 20KB of SRAM, and 64KB of flash, and consume far less energy than standard ARM processors. They offer an amazing amount of computing power for a cheap package that can be run on a battery for a long time. They are perfect for prototyping running compute-intensive algorithms like machine learning on embedded systems.

Unfortunately, though their price point makes them very accessible, there are other barriers to getting started with the boards. They require separate hardware to program, and some basic wiring skills. The system software that you need to do anything useful with them is also often proprietary and confusing. This framework tackles all those problems by standardizing a work flow based on open software and hardware, providing step-by-step guides for the small amount of wiring needed, and offering self-contained system functions and examples in plain C.

Before you get started, you'll need to have a few pieces of hardware available. No soldering or tools are required though, you should be able to assemble everything you need by hand. My thanks go to Andy Selle who pioneered the approach that I've documented below.

Install OpenOCD on your Pi

These steps assume you have a Raspberry Pi 3 running a recent version of Raspbian. There's nothing that I know definitely won't work on a Pi 2 (or a Pi Zero/One with an adjustment to the OpenOCD scripts), but I've not tested any other combinations. The approach I'm using came from a great AdaFruit guide, which I recommend checking out for more background on what we're doing.

The main piece of software we need to install is OpenOCD, the Open On-Chip Debugger. Despite its name, this tool also handles flashing micro-controller flash memory with new programs, as well as displaying debug information from the chip. It does this through the Serial Wire Debug protocol, communicating through dedicated pins on the Blue Pill board.

OpenOCD doesn't have a binary package for the Pi, but it is easy to compile. To build it, run these commands in the terminal on your Pi:

Wiring up your Blue Pill

The four pins at the thin end of the Blue Pill board are dedicate to the SWD protocol, and need to be connected to the right pins on the Pi's header, which OpenOCD will then control to program the chip.

Here's a diagram showing how the wires should be attached between the Pi and the board: 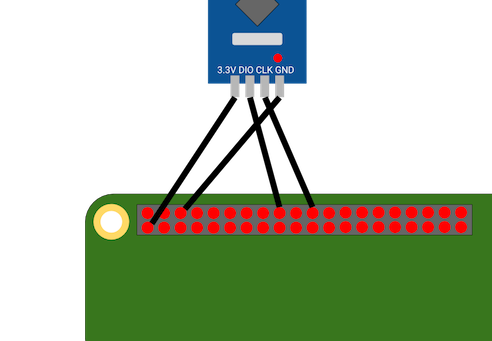 This is based on the wiring recommended by the AdaFruit tutorial, where ground and power (3.3V) can be driven by any of the multiple pins on the Pi that supply them, SWDIO (the data pin) is on pin 24, and SWDCLK (the clock pin) is on pin 25. I'm leaving the reset pin unconnected, since it's optional.

Here are some photos of my actual setup: 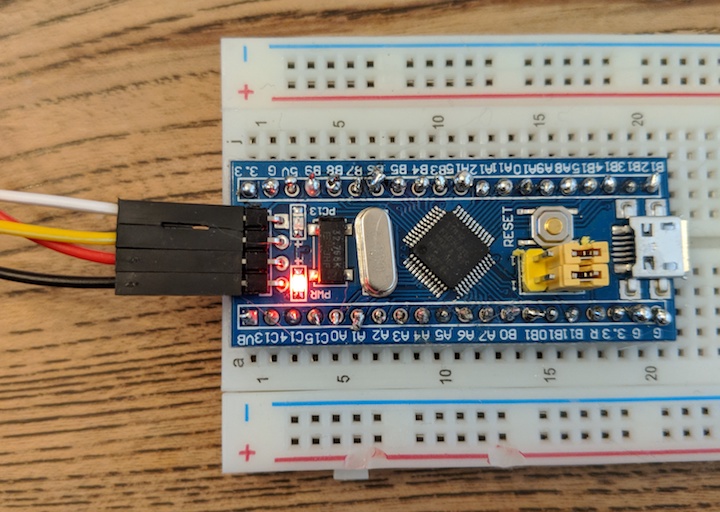 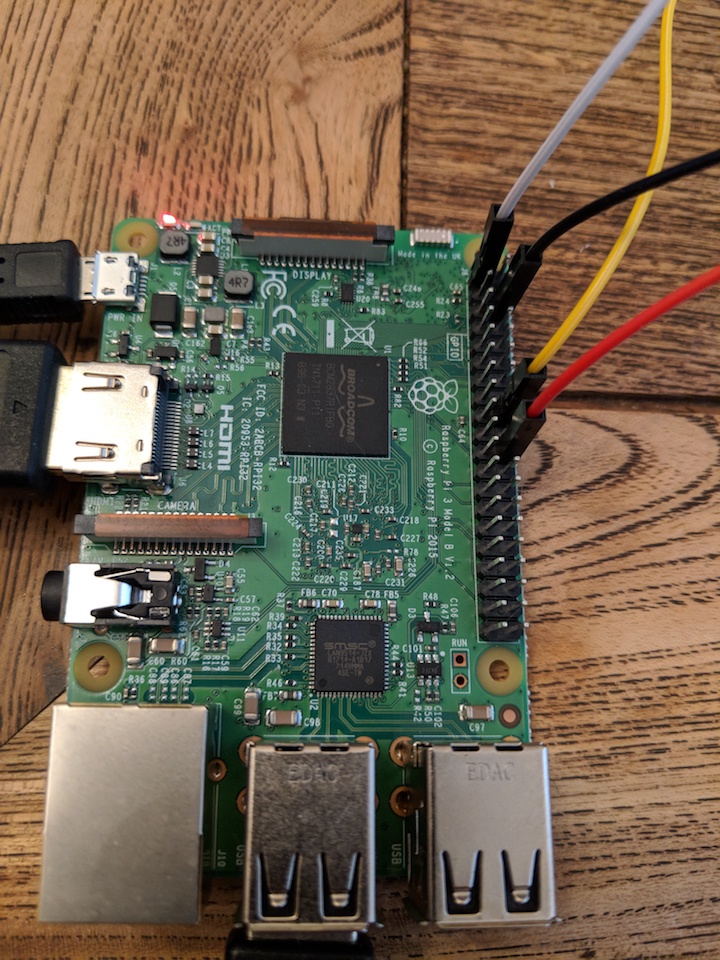 If you're using female-to-female jumper wires, you should be able to just push the connectors at each end onto the corresponding pins, and they should fit snugly with a small amount of force.

There are also two yellow plastic jumper switches on the board. Normally they will both in position furthest away from the SWD pins, and closest to the small USB port. This is the recommended position for our workflow, but if they're in a different place when you get your board, you may need to move them back.

Once you've wired in the ground and power (3.3v) connections, you should see a red LED on the board light up. If it doesn't, check your wiring, or try another board in case there's a defect.

Now you should be ready to build some example programs for the Blue Pill board. To do this, you'll need to clone ARM's CMSIS 5 micro-controller library from GitHub and get this repository too. You'll also need to install the cross-compilation toolchain for ARM.

Now you should just be able to build the library and examples by running:

These are not quite like normal executables, they're just exact copies of the bytes that need to be copied into flash memory on the device. They don't contain any debug symbols, and the very start of flash has to be a table of function pointers, so making sure that boot.s is first in linking order is important. You don't need to worry about that for these examples, because the makefile takes care of all that, but once you start building your own programs you'll need to be careful.

Once you've got this library's repository from GitHub, you can start testing your wiring connection. There are a lot of settings you need to pass to OpenOCD to make a successful link, so to make things easier these are included in opened.cfg in the root of the source tree. To try out OpenOCD, run:

If it's working correctly, you should see output like this:

If you see Error: Could not initialize the debug port instead, that's a sign that's something is wrong with the connection. Check your wiring, and if that's okay make sure that you have the correct pins on your Pi hooked up.

With OpenOCD running in one terminal, open up a new window and type:

This should bring you to a command console for OpenOCD that looks something like this:

This is the place where you can execute commands to control the Blue Pill board. The first thing we need is to stop the chip so we can program it. We do that by running the reset halt command, which means restart the CPU and then stop before executing any instructions.

Next we will upload one of the binary example programs we've built with flash write_image erase gen/bin/examples/blink.bin 0x08000000. This is telling OpenOCD to write the data in the file, starting at address 0x08000000, which is where flash is mapped to on the Blue Pill.

If it complains that the file isn't found, make sure that the examples built correctly in the earlier step, and that the openocd command was run from the stm32_bare_lib source folder.

Finally we need to restart the chip again, at which point it should try to execute the program we've just uploaded to flash. We do this with the plain reset command, which with no arguments restarts the chip and begins execution.

If you look at the board, you should see a green LED just below the red power LED flashing a couple of times a second. Congratulations, you've run your first micro-controller program!

Blinking LEDs is fun, but to be at all productive on complex programs we need to be able to easily pass information back to the host computer for debugging purposes. The Hello World example shows how to use DebugLog() to do this. To run it, execute these commands in the OpenOCD command console:

If you switch back to the first terminal that you started the openocd command in (not the console you just used), you should see the line "Hello World!" at the bottom.

The DebugLog() function can take several hundred milliseconds to execute, since it has to call back to the host machine, so it shouldn't be used in performance-critical code, but it is handy when you're trying to track down issues.

The standard Gnu debugger gdb works reasonably well with this setup. To install it, run:

You can then debug a program by executing:

You should see a gdb prompt, and you can execute commands to inspect variables:

If the program has crashed, you should also be able to inspect the call stack. I haven't found it easy to step through programs or continue execution though.

If you want to create your own programs using this framework, you should start off by copying one of the examples and expanding it. You'll need to:

When you need to call more advanced capabilities on the micro-controller, there are a couple of different approaches. Arm's CMSIS library defines a lot of device registers in core_cm3.h. It can't be called without some extra definitions beforehand though, so stm32_bare_lib's core_stm32.h header handles setting those up for the Blue Pill.

Device manufacturers typically also release a header file that defines registers for peripherals that are not standard across all particular CPUs but that exist only on their boards. Since Blue Pill SoCs are STM32-compatible, these would normally be in something like stm32f*.h, but this is only available as part of proprietary products from ST. Instead, the core_stm32.h header includes a few of the most commonly-used device registers, as defined by ST's reference guide to the processor. These definitions are used to set up and control the LEDs for example.

Looking through the examples folder should give you some ideas on the sort of things that are possible.

STM32duino has a wealth of information on Blue Pill boards, and the name even comes from a thread on their forums.

Thomas Trebisky has some fantastic examples of bare-metal STM32 programming, and I've found them very useful to reference as I've been working on this.

David Welch has also made available great sample code for the STM32.

Reference Manual - The ultimate resource for understanding what the micro-controller can do.