Important: please vote on the future of ClosureTree!

Dramatically more performant than ancestry and acts_as_tree, and even more awesome than awesome_nested_set, closure_tree has some great features:

Note that closure_tree only supports ActiveRecord 4.2 and later, and has test coverage for MySQL, PostgreSQL, and SQLite.

As stated above, using multiple hierarchy gems (like ancestry or nested set) on the same model will most likely result in pain, suffering, hair loss, tooth decay, heel-related ailments, and gingivitis. Assume things will break.

Child nodes are created by appending to the children collection:

Or by appending to the children collection:

Or by calling the "add_child" method:

Or by setting the parent on the child :

You can find as well as find_or_create by "ancestry paths".

If you provide an array of strings to these methods, they reference the name column in your model, which can be overridden with the :name_column option provided to has_closure_tree.

As of v5.0.0, find_or_create_by_path can also take an array of attribute hashes:

If you're using STI, The attribute hashes can contain the sti_name and things work as expected:

Moving nodes around the tree

Nodes can be moved around to other parents, and closure_tree moves the node's descendancy to the new parent for you:

When it is more convenient to simply change the parent_id of a node directly (for example, when dealing with a form <select>), closure_tree will handle the necessary changes automatically when the record is saved:

hash_tree provides a method for rendering a subtree as an ordered nested hash:

If your tree is large (or might become so), use :limit_depth.

Without this option, hash_tree will load the entire contents of that table into RAM. Your server may not be happy trying to do this.

Since most of closure_tree's methods (e.g. children) return regular ActiveRecord scopes, you can use the includes method for eager loading, e.g.

However, note that the above approach only eager loads the requested associations for the immediate children of comment. If you want to walk through the entire tree, you may still end up making many queries and loading duplicate copies of objects.

In some cases, a viable alternative is the following:

This would load authors for comment and all its descendants in a constant number of queries. However, the return value is an array of Comments, and the tree structure is thus lost, which makes it difficult to walk the tree using elegant recursive algorithms.

A third option is to use has_closure_tree_root on the model that is composed by the closure_tree model (e.g. a Post may be composed by a tree of Comments). So in post.rb, you would do:

This gives you a plain has_one association (root_comment) to the root Comment (i.e. that with null parent_id).

It also gives you a method called root_comment_including_tree, which you can invoke as follows:

The result of this call will be the root Comment with all descendants and associations loaded in a constant number of queries. Inverse associations are also setup on all nodes, so as you walk the tree, calling children or parent on any node will not trigger any further queries and no duplicate copies of objects are loaded into memory.

The class and foreign key of root_comment are assumed to be Comment and post_id, respectively. These can be overridden in the usual way.

The same caveat stated above with hash_tree also applies here: this method will load the entire tree into memory. If the tree is very large, this may be a bad idea, in which case using the eager loading methods above may be preferred.

to_dot_digraph is suitable for passing into Graphviz.

For example, for the above tree, write out the DOT file with ruby: 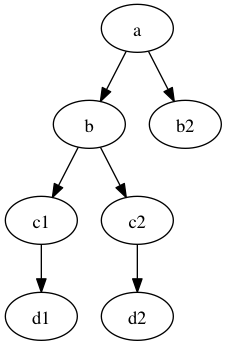 If you want to customize the label value, override the #to_digraph_label instance method in your model.

Just for kicks, this is the test tree I used for proving that preordered tree traversal was correct: 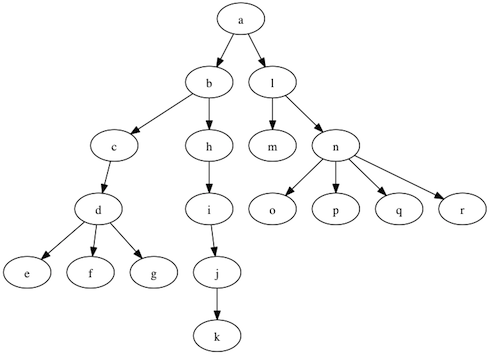 When you include has_closure_tree in your model, you can provide a hash to override the following defaults:

You can work around that by overloading the rebuild! class method in all your STI subclasses and call the super classes rebuild! method:

This way, the complete hierarchy including all subclasses will be rebuilt.

By default, children will be ordered by your database engine, which may not be what you want.

If you want to order children alphabetically, and your model has a name column, you'd do this:

If you want a specific order, add a new integer column to your model in a migration:

and in your model:

When you enable order, you'll also have the following new methods injected into your model:

If your order column is an integer attribute, you'll also have these:

With numeric ordering, root nodes are, by default, assigned order values globally across the whole database table. So for instance if you have 5 nodes with no parent, they will be ordered 0 through 4 by default. If your model represents many separate trees and you have a lot of records, this can cause performance problems, and doesn't really make much sense.

You can disable this default behavior by passing dont_order_roots: true as an option to your delcaration:

In this case, calling prepend_sibling and append_sibling on a root node or calling roots_and_descendants_preordered on the model will raise a RootOrderingDisabledError.

The dont_order_roots option will be ignored unless numeric_order is set to true.

Database row-level locks work correctly with PostgreSQL, but MySQL's row-level locking is broken, and erroneously reports deadlocks where there are none. To work around this, and have a consistent implementation for both MySQL and PostgreSQL, with_advisory_lock is used automatically to ensure correctness.

Note that you will eventually have data corruption if you disable advisory locks, write to your database with multiple threads, and don't provide an alternative mutex.

Are there any how-to articles on how to use this gem?

Does this work well with #default_scope?

No. Please see issue 86 for details.

Can I update parentage with update_attribute?

No. update_attribute skips the validation hook that is required for maintaining the hierarchy table.

Can I assign a parent to multiple children with #update_all?

No. Please see issue 197 for details.

Does this gem support multiple parents?

No. This gem's API is based on the assumption that each node has either 0 or 1 parent.

The underlying closure tree structure will support multiple parents, but there would be many breaking-API changes to support it. I'm open to suggestions and pull requests.

How do I use this with test fixtures?

Test fixtures aren't going to be running your after_save hooks after inserting all your fixture data, so you need to call .rebuild! before your test runs. There's an example in the spec tag_spec.rb:

However, if you're just starting with Rails, may I humbly suggest you adopt a factory library, rather than using fixtures? Lots of people have written about this already.

This is expected if you aren't using MySQL or Postgresql for your tests.

SQLite doesn't have advisory locks, so we resort to file locking, which will only work if the FLOCK_DIR is set consistently for all ruby processes.

In your spec_helper.rb or minitest_helper.rb, add a before and after block:

When building from source, the mysql2, pg, and sqlite gems need their native client libraries installed on your system. Note that this error isn't specific to ClosureTree.

A bug was introduced in MySQL's query optimizer. See the workaround here.

Closure tree comes with some RSpec2/3 matchers which you may use for your tests:

Closure tree is tested under every valid combination of

Assuming you're using rbenv, you can use tests.sh to run the test matrix locally.